The Texting and Driving Dilemma 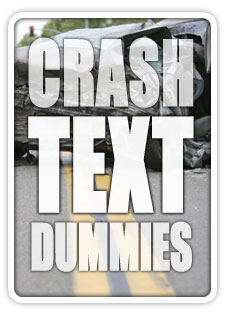 You like to consider yourself a sensible driver, right? In today's driving world, most would agree that drinking and driving is certainly not sensible. In fact, given that each year about 150 drunk drivers in the state of California are found guilty of vehicular manslaughter, you could say that drinking and driving is not only irresponsible, it is down right deadly. With our extreme awareness and overwhelming negative attitude toward drunk driving, the belief that driving under the influence is a destructive behavior is widely accepted. What society has just now began to admit is that distracted driving can be just as unsafe, if not more perilous than driving while intoxicated.

When breaking down the statistics above, it doesn't take a brain surgeon to figure out that texting and driving can be a deadly combination. Given the mass amount of drivers using hand held devices while driving and their delayed reaction times, it's no surprise that in 2008, well over 5,000 people died and another half million were injured in accidents involving distracted drivers, including those text-messaging. 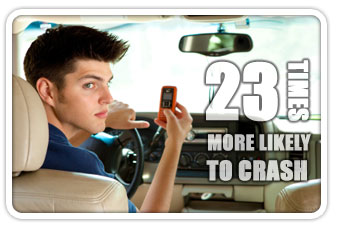 One of the most informative studies was done by The Virginia Tech Transportation Institute in July 2009, showing that drivers texting were over 20 times more at risk of getting into a crash. Stunningly, texting drivers were over 3 times more distracted than drivers dialing or talking on their cell phones who were 6 times more at risk of crashing than non-distracted drivers. The logic behind why text messaging and driving can be so distracting, even more distracting than talking on a phone, is two-fold. First and foremost, drivers need to glance away from the road and use their fingers when typing a message. Secondly, drivers often get so carried away in the text message conversation they are having that their ability to fully concentrate on driving diminishes. 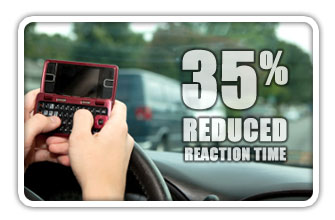 When it comes to teenage drivers, text messaging while operating a motor vehicle is even more of a concern. With inexperience and risk-taking behavior already working against younger drivers, adding hand held devices into the mix only makes matters more worrisome. Even teens themselves confess that texting is their biggest driving distraction; with nearly 4 out of 10 of those surveyed admitting that text messaging was extremely distracting. With "teen driving texters", you've got drivers who are not only inexperienced greenhorns; they aren't fully concentrating on the road.

In response to this growing nationwide problem, several states, such as California, have already made regulations preventing the use of hand held text-messaging devices by drivers, and additional states are expected to follow suit. In October 2009, the White House also joined the anti-texting-and-driving party, banning all 4.5 million federal employees from using messaging features on their phones while driving.